A month ago I successfully defended my doctoral thesis.

I had to present my work to the examination committee and answer their questions. Then I left the room while the examiners discussed the outcome. Finally, the committee chair invited me back into the room, shook my hand and said: “Congratulations, Dr. Straka!”

What a moment! It marks the passage from one identity to another: from doctoral candidate to scholar. I had been through an extensive initiation process lasting many years, culminating in this rite of the doctoral examination. I was  pronounced worthy and my peers  were now welcoming me into the elite community of scholars. A joyful moment – after a journey rife with contradictions.

The alienating nature of a social work PhD

Throughout my PhD, I often critically reflected on my motivation for pursuing a doctorate. I’m someone who already has a privileged social location: white, middle class, and cisgendered. A doctoral degree would push me into an even more elite position. I experienced this as a contradiction because the purpose of my education was to serve those who are marginalized and living in poverty. My PhD would alienate me even further from them, widening the gap.

I’m already different enough from them. A blue collar friend once told me, “I can tell you’re middle class by watching how you walk down the street.” (And it wasn’t because of my clothes.)

Like all middle-class kids, I grew up insulated from the realities of poverty.

My immigrant parents worked very hard to give us a good future. They were successful and I am who I am today because of the advantages I had growing up.

For a long time, I felt entitled to all that I had. It was my birthright, so I believed.

And I thought everyone’s lives were similar to mine – with the exception of the mythical poor. Mythical because I heard about poverty in the media, but had never really seen it. Like all middle class children, the starving poor children in Africa were often mentioned when I didn’t clean my plate. I also had the vague awareness that the “poor children” didn’t get as many toys as I did. But I never saw any real-life “poor children” and my ideas about what they were like came from Victorian children’s books that romanticized poverty, like The Five Little Peppers and How They Grew. As I reached adulthood, I started wondering: Where do the poor people live? The question of poverty was always there in the back of my mind, but the wall between the social classes is high and wide indeed.

So here’s how I decided to live with this contradiction. Concurrent with my PhD process, I made a political and ideological choice to live in solidarity with the poor. These two life choices – pursuing a doctorate and living in marginalized neighbourhoods – became tightly interconnected. I can’t talk about one without talking about the other.

Becoming educated about the lived realities of social injustice

My social work education gave me the conceptual tools to understand why society is structured the way it is. But living in disadvantaged neighbourhoods made me get close and personal to those living very different realities from mine — not only in their problems, but also in their strengths. 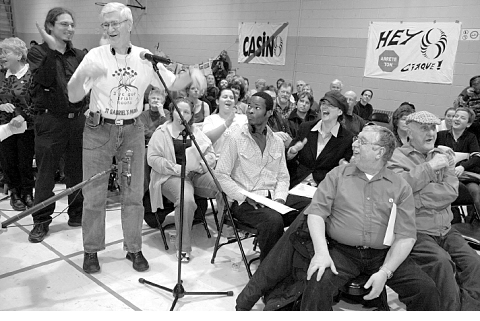 A bonus was that my partner grew up in one of these poor communities. She has been instrumental in helping me understand the ways that people get mercilessly squeezed and pushed and driven to hopelessness.

My values were profoundly re-shaped by where I now chose to live. For example, it was a shock to learn that in Pointe St. Charles, people saw me as rather useless. My partner has highly valued skills. She can fix a car, drywall a room, carry heavy things, grow a garden and paint a staircase. I often felt like people felt sorry for her, because I have so few real skills. And you know… I get where they’re coming from.

For one thing, I was a social worker and people in “the Pointe” hate social workers. On top of that, nobody in my neighbourhood saw the point of higher education. A good union job is more highly valued. They also didn’t understand why I wasn’t out getting a job. And nobody understood that the research contracts I worked on were real jobs. So I had to learn to get over myself and to integrate into my community the best way I could. Otherwise my education would be sheer hypocrisy.

I wept at ugliness of the neighbourhood. It breeds poverty of spirit. I learned to laugh at the clever strategies to scam “the man” and survive (like watching a man systematically steal all the outer metal plates covering the gas pipes going into homes and selling them for scrap). I found myself cheering for the guy trying to outrun the cops who were hassling him for no real reason – and escaping them by hopping a fence. My friends taught me the value of sifting through people’s garbage and stockpiling reclaimed items for future barter. Then there was the time that by accident, I learned that a close friend had no food in the house, when I chided her for not scooping her dog’s poop (because she had no grocery bags…). I learned to stop judging people’s behaviours and instead, to try to understand. Perhaps most important, I learned to respect them and to listen.

So my “education” is really made up of many things. My formal education gave me the lenses, my community gave me the realities, and my partner has helped me to bring them together. Many people have shared their stories and I hope that I have learned how to listen really well.

So what good is a social work PhD?

Getting back to my doctorate, what does it mean to me, considering the context in which I earned it?

To begin with, I’m proud of myself. I’ve finished my doctorate in the face of a great many challenges and hurdles. Many people start a doctorate; few finish. I’ve been unbelievably blessed to have the tremendous support of my spouse, my family, my friends, and the supervisor who brought me to the finish line. I can’t even begin to name the many people who contributed to this achievement. It takes a village to get a doctorate, I believe.

I feel like I’ve assumed a sacred responsibility in entering the community of scholars. We are the guardians of a certain type of knowledge. It’s not necessarily the most important knowledge. But it’s a special kinds of knowledge. It’s often been used to oppress. But it is also used to liberate. We debate and contest each others ideas and hope that in the process, we continue to develop what we call “knowledge”. Knowledge is not neutral. It’s inseparable from power. And that’s exactly where I see my sacred responsibility as a social work scholar. How do I use the power I have, by virtue of my doctorate and being part of the academy, in a way that helps create a more just society? Who keeps me honest in this quest?

Can the master’s tools be used to dismantle the master’s house? I think perhaps yes, as long as the person with access to the tools brings them back to the people and works alongside the people in using them. It means always living on the margins – belonging to two worlds and not really belonging to either.

I have my doctorate because I came to my education from a position of privilege. But at the same time, I’ve done it despite a number of serious disadvantages that weave my experiences and my life story together with those of the people with less voice. The only way I can justify my doctorate is to use it in service, to dismantle unjust social structures, to subvert knowledge that perpetuates the status quo, to help educate a new generation of social workers and inspire them to working for a more just society. And I count on my community – real life and virtual – to help keep me honest in the process.